My husband will tell you that I have spent several hours every day during the past 2-3 weeks consumed with researching my Harrell Family line. He is correct that I have done little else during this time. It seemed that the more I browsed and read whatever I could find online about this family, the more confused I became. There were just too many family members with the same given names and references with conflicting stories. But, last week, I think I finally solved what I call The Mehitibel Mess.

It all began when I was searching for documents that would connect me to one Levi Harrell in my maternal line who lived in South Carolina between 1750 and 1803. Hopefully, the relationship chart below will assist in referencing some of the family members included in this post. 1 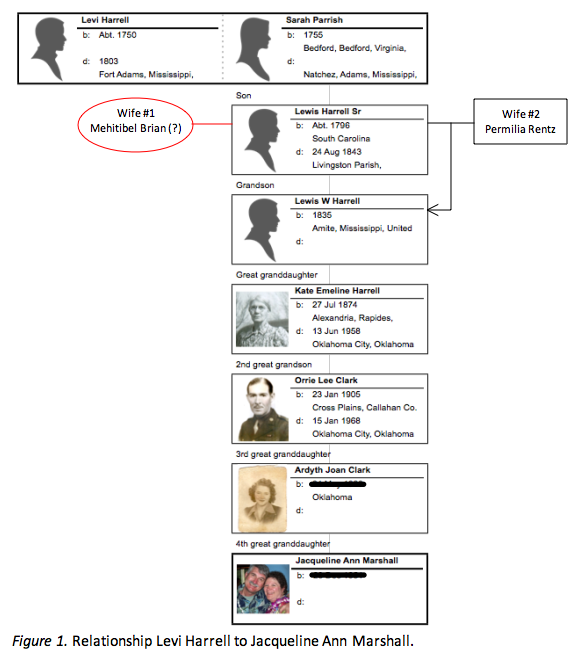 As I set out to establish Levi’s relationship as my 4X-great-grandfather, I began by using my routine search strategies and working my way through available sources in Ancestry.com and then moved on to Google searches. It didn’t take long to realize that I had stumbled into a long-standing Harrell Family quandary. In fact, it appears that identifying Levi Harrell (known as “Fat Old Levy” 2) and his descendants has been the subject of much speculation and controversy long before I found my way into it. 3 But that is another story for a future blog post.

My descendancy from and relationship to Lewis Harrell, Sr. (1796-1843) is reasonably well-documented. However, in trying to establish Lewis, Sr. (see Figure 1) as a son of “Fat Old Levy,” I came across a very interesting story about how the Harrell Family came to settle Louisiana. This story had been told by a grandson of Levi Harrell in an “Autobiography of William Harrell” 4 shared through The USGenWeb Project . As part of his story, Mr. Harrell names each of the Harrell Family members who first settled in East Feliciana Parish and how they were related to each other. His statement that, “Uncle Louis and Leny (Levy) married daughters of a widow Bryant,” 5 caught my attention because my family records indicated that Permelia Rentz was Lewis W Harrell’s mother and my 3X-great-grandmother.

Of course, I assumed the easiest explanation was that Lewis Harrell, Sr. had probably been married twice. Sure enough, I located two marriage records 6 among the databases at Ancestry.com verifying that Lewis Harrell, Sr. and Mahitybee Brian had married on 01 February 1816. Somewhat surprisingly, this union was also documented in a statement on the War of 1812 Widow’s Pension application filed by my 3X-great-grandmother, Permelia, in 1878 (see Figure 2). 7

So the pension application clearly lined out that Mehitibel Brian was the first wife of Lewis Harrell, Sr. and Permelia Rentz was his second wife. Mystery solved, right? Not exactly.

While searching for records to find out more about Mehitibel Brian, I learned that she is recorded as one of seven children born to Hardy Brian, Sr. and Jemima Morgan of Darlington County, Cheraws District, South Carolina. 8 But Mehitibel’s story became very confusing to me as I read through Hudnal’s often-cited, “History of Francis Brian” in which the author stated that Mehitibel had married Eli White on 04 March 1816. 9 The paragraph continues by noting Mehitibel died on 05 October 1820 and that she and Eli White had one daughter, Virginia Brian White. 10 But, wait! Wasn’t she already married to Lewis Harrell, Sr.? Was that marriage annulled and she married again one month later? Did they divorce? Was it simply a typing error by the author? I was very confused.

My confusion about Mehitibel grew as I continued reading this report. It included a transcribed letter from Hardy Brian’s great-great-granddaughter wherein she noted that her grandfather told her “that his sister, Mehitibel Brian, had married Eli White.” 11 The letter goes on to describe Mehitibel White’s efforts to assure that Hardy Biran would be buried in the White Family cemetery and that she too was buried there later “near her father and husband.” 12

But the truly confounding piece of information included in this report was a transcribed 1828 East Feliciana Parish Court record naming the heirs of Hardy Brian for the purpose of partitioning his land. 13 Mehetabel White is listed among the heirs and she is represented by her husband, Eli White. 14 But then just a few lines further down, the name, Mehetabel (no last name), appears again and is identified as a “minor of the Parish of Natchitoches.” 15Holy cow! How many more Mehitiabel/Mehetabel’s were there?

Indeed, at first glance, the list of heirs appeared to add to the Mehitibel confusion. However, upon closer study, the named heirs of Hardy Brian would become the keys to untangling this family naming mess. Table 1 lists the heirs in the order that they were recorded in the court document. 16 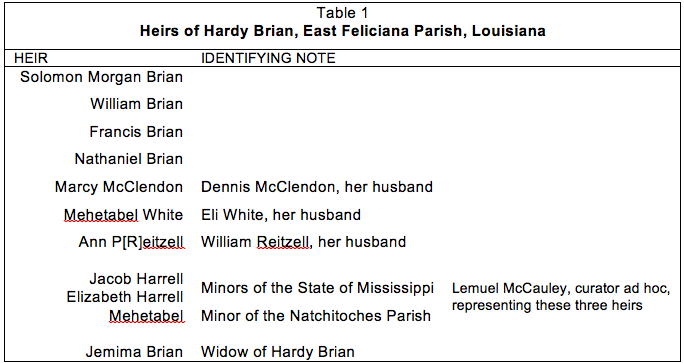 The minors, Jacob and Elizabeth Harrell, first caught my interest because my research indicated that they were the children of my 3X-great-grandfather, Lewis Harrell, Sr.  and Mehitibel Brian. Since they are listed as minors and the date of the court record was 16 September 1828, both individuals would have to have been born after 1807. In addition, if Jacob and Elizabeth did not share the Brian surname but are listed as heirs, they must be related to Hardy Brian somehow. As such, this implied relationship would support the claim that both were the children of Hardy and Jemima’s deceased daughter, Mehitibel Brian Harrell and thus, his grandchildren. This claim is further supported by noting that Lewis Harrell and his family appear in the 1830 U.S. Census record living in Amite County, Mississippi. Although only Lewis’ name appears in the record, there is one male and one female enumerated between 10 and 14 years of age 17 who likely could have been Jacob and Elizabeth.

In considering the other minor, Mehetabel, she also had to have been born in the same timeframe as Jacob and Elizabeth. Since this minor could only have been at most 9 years old when my 3X-great-grandfather married Mahitybee Brian in 1816, it is highly unlikely that she was the same person. The court record also notes that she was living in Natchitoches Parish and not in Mississippi. She is listed with no surname, but her implied relationship to Hardy Brian resembles that of Jacob and Elizabeth meaning that she is likely another grandchild.

So now it appears very likely that there were at least two Mihitabel/Mehetabel’s – one born around 1800 and one born sometime between 1807-1828. Which one of these females is the daughter of Hardy Brian? Which one marries Lewis Harrell and which one marries Eli White? Possible answers to these questions are found in an 1825 East Feliciana Parish notarial record which named the heirs of one Levi Harrell, deceased. The identified heirs were Mercy McClendon, Hezekiah Harrell, Anna Harrell and Mehitibal Harrell. 18 Looking again at Table 1, the list of Hardy Brian’s heirs includes three persons whose given names match — Marcy McClendon, Ann P[R]eitzell, and Mehetabel White.

Anecdotal evidence mentioned earlier in this blog post indicated that Levi/Levy Harrell had married a daughter of “a widow Bryant.” 19 Evidence that one Levi Harrel married Elizabeth Brian on 03 March 1808 in Wilkinson County, Mississippi, was found in the Ancestry.com database. 20 When all of these records are considered together, it appears likely that Marcy McClendon, Ann P[R]eitzell, and Mehetabel White listed as Hardy Brian’s heirs in 1828 are the children of Levi Harrell and Elizabeth Brian and thus, his grandchildren. This also means that all three children were born after 1808 which supports the claim of at least two Mehitibel’s.

A search of US census records at Ancestry.com revealed a Mehitabel White recorded in 1880 as married to Eli White. 21 This record indicates that she was born about 1815 in Louisiana which is consistent with earlier census records for the same household. 22 The age of this Mehitabel White also is consistent with that of Mehetabel Harrell, the daughter of Levi Harrell and Elizabeth Brian.

After examining all of these records and considering the implications, it calls into question the earlier-cited Hudnal claim that Mehitibel Brian (1799-1820) is the daughter of Hardy Brian and Jemima Morgan and married Eli White. In fact, it appears much more likely that Hardy and Jemima’s daughter married Lewis Harrell, Sr., in 1816 and died in 1820. It also appears more likely that Hardy and Jemima’s granddaughter, Mehitibal Harrell, was born about 1815 and later married Eli White.

There ends the Mehitibel/Mehetabel Mess. There were two different individuals:

[AUTHOR’S NOTE: I’ve updated my family tree records to reflect these relationships. I’m also pleased to report that the lines in my forehead are no longer furrowed due to frustration and confusion.]

2 Replies to “The Harrell Family and the Mehitibel Mess”