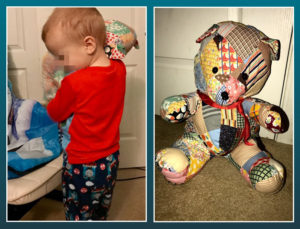 On Christmas 2016, our grandson received a very special gift from his great-aunt Trisha. She had made him a teddy bear that he calls, “Special Bear.” That name is perfect because his great-aunt had used family heirloom quilt tops to construct the bear (see Image 1). 1 This is a story of how “Special Bear” came to be. But, it’s mostly the story of the fascinating woman, Kate Emeline Harrell, who originally hand-stitched the quilt tops as a wedding gift for her granddaughter.

Kate Emeline Harrell was born in Alexandria, Rapides Parish, Louisiana, on 27 July 1874 2 to Lewis Washington Harrell (1835-?) and Nancy Emeline Pentecost (1836-1900). She was the youngest of seven children. Her grandfather, Lewis Harrell, Sr., is said to be among some of the first settlers in East Feliciana Parish, Louisiana, circa 1803. 3

Her parents married in 1856 in St Helena Parish and were recorded as still living there in the 1870 US census. 4 Her father served in the Confederate Army and his military file indicates he was among those who deserted at Vicksburg, Mississippi, just two days prior to the end of the siege. 5

Although Kate’s family appeared to be well-established in St Helena Parish, we know very little about her life from the time she was born until she married in 1893. No record of her or her family appears in the 1880 U.S. census to indicate that they were still living in St Helena Parish. In fact, subsequent multiple searches utilizing a variety of parameters across all states have yet to reveal where the family resided in that census year. Extensive online searches across a range of record types including probate files, land records, and newspapers also reveal nothing about where the family was living or its makeup. To date, the only clue as to the possible whereabouts of the family between 1870-1890 rests in family lore. Some family members vaguely remember hearing that Kate and her family lived in Nacogdoches prior to arriving in Limestone County, Texas. 6

Through census records and the childhood memories of her son, Robert Carey Clark (1907-1988), we learn that by 1892 Kate and many of her family members somehow had found their way to Limestone County, Texas. It was here that she met and married James Ransom Clark (1869-1918) on 23 July 1893 in the town of Groesbeck. 7 Over the twenty-three years of the marriage, they lived and worked hard on several farms while raising a family of eight children (3 daughters and 5 sons) as noted in Table 1:

The childhood stories that Robert Carey wrote about reveal rich details about their daily lives as the family moved from county to county and farm to farm to eke out a living. In one story, he describes the family’s starkly primitive privy that consisted of two sheet metal panels erected “in the corner of the cow lot.” 8 He concludes this description by noting how remarkable it seemed to him that such a large family “with young ladies – and [his] mother in her 30’s not even having an outhouse.” 9

In 1915, the family loaded everything into a covered wagon 10 and relocated to Girard, Kent County, Texas. This move brought them closer to James’ brothers, Edmund Webb Clark (1875-1961) and Robert Charles Clark (1880-1946) whose families had settled there earlier. 11 Farming this new area was even more grueling than it had been before. The land had to be cleared and water was becoming scarcer.

By 1917-1918, farmers in Kent County and throughout West Texas were experiencing what currently “ranks as the third driest 12-month period” on record. 12 Because drought conditions were so extreme and had decimated crops, the Texas Legislature passed the “Drought Relief Law” in 1918 that provided loans for seed and food. 13

The winter of 1918 also brought the beginning of the “deadly influenza pandemic” 14 that wiped out almost 5% of the world’s population. 15 In Kent County, entire families were suffering at the same time from this horrible virus with little hope of medical help arriving to provide relief. 16 Tragically, this was likely a contributing cause of James Ransom’s untimely death in May 1918. 17

Suddenly, Kate was a widow with six children ranging in age from 18 yrs to 4 yrs who needed to be fed, clothed and comforted. It’s difficult to imagine the loneliness and despair she must have felt at this point in her life. With little hope of surviving on their drought-riddled farm and eager to put sadness and strife behind them, Kate and her children joined her husband’s brothers and their families and moved to Oklahoma City in 1919. 18 19

In the 1920 US census, Kate and her six younger children are recorded as living in a rented house on West Sixth Street in Oklahoma City, Oklahoma (see Figure 2). 20

As a widow with such a large family to support, everyone in the household who was old enough to have a job was employed. Kate was working in a laundry as a presser and the other three also had wage earning jobs. Through the next ten years, four of these children got married and started families of their own. Sadly, tragedy struck again in December 1928 when her daughter, Ninnie Augusta “Nina,” died unexpectedly at age 26. 21

In the 1930 US census record, Kate was living with her two youngest sons in a home that she owned in the southeast area of Oklahoma City. 22 She was no longer employed outside her home and did not own a radio. By 1940, Kate and her son, Harrell, had moved to Duncan, Stephens County, Oklahoma, and were living in a rented home. 23

Sometime not too long after the 1940 US census was taken, Kate and her son, Harrell, moved back to Oklahoma City. The details of her daily life during this time are best described in the following recollections written by her granddaughter, Ardyth Joan Clark: 24

My first memories of my Grandma Kate were when I was about three years old. My family lived temporarily in her home. I have a vivid memory of Grandma Kate at breakfast time in her kitchen. Each and every morning she would be standing by the stove with a giant wooden bowl working the batter for our morning biscuits. She made them very quickly every morning. In fact, any time I spent any overnight visits in her home, she still continued this ritual every morning. Another breakfast ritual was that she would cook a large pot of oatmeal for us but always made extra for Laddie, her dog.

When I was growing up we would often have family reunions at her house. There were many cousins and she would put us all in one bed for the nights. This was the very ultimate fun because there was a big feather mattress on the bed and we could roll and tumble on it. After it was way past our bedtime, she would come to the door of the room and threaten us with dire consequences if we didn’t get to sleep. No more laughing and talking.

Now Grandma Kate was a truly dedicated Christian lady attending church services every time the doors of the church were open. As far as I could tell she had only one bad habit, at least to me it seemed really bad. She dipped snuff all of her adult life. I was fascinated by this strange brown powder even thinking it might be cocoa since it was brown. When I asked if I could taste it she was quick to tell me that I wouldn’t like it because only grownups used it. There was one redeeming thing about it and that was she would send me to the little grocery store to buy more snuff when she ran out. The grocer was a kind old gentleman and he would always add a nice piece of penny candy to the bag for me.

When she and her son Harrell lived a couple of blocks from our house her dog Laddie would come to our front door every morning before we left for school and follow us to school. Now Laddie was a very large Chow mix dog and he frightened the kids so bad that the school would call our house and insist that someone come to take him home. After my family began shutting him in, he would wait until later in the day and meet us after school. I am sure the school authorities were pleased when Grandma Kate moved farther away.

When Jackie’s dad and I were engaged, we felt that it was time for us to go to see her so she could meet him. Laddie usually barked at any strange man so fiercely (the ice man, milk man, mail man) and scared them so bad they would not come through the front gate. Laddie failed to even bark at Jackie’s dad. Grandma Kate said immediately that he must be a really good man or Laddie would not have let him in the door.

She spent almost all of her spare time making quilts and gave me two handmade tops as a wedding present. When she was quite elderly and after Laddie was gone, she had a pet parakeet. He talked all the time and was allowed free use of her house. He gave her a lot of pleasure. 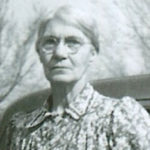 Kate Clark lived the remainder of her life in the Oklahoma City metro area. Thankfully, she enjoyed being with her extended family so I was lucky enough to have spent some time with her. Although I was very young, I do have a warm memory of sitting on the lap of this woman with silvery white hair as she rocked me. As described in the story above, she had been a faithful member of the Mayfair Church of Christ until she passed away on Friday, 13 June 1958. 25

During her eighty-three years of life, Kate had experienced countless hardships and sorrows. But her life was also filled with and bolstered by the joy found in the pursuit of raising and expanding one’s family to include eight children, sixteen grandchildren and thirty-three great-grandchildren. 26 To that end, she gave the gift of herself through her cooking, her love of animals and her sewing.

Finally, please revisit the first sentence of the last paragraph of her granddaughter’s memories above. For it is in that sentence that we learn much about the woman who gathered the fabric pieces, cut them into quarters and patiently stitched this treasured wedding gift by hand. These quilt tops were cherished and protected for almost seventy years until they recently were given new life because of another act of love. Through the inspiration, skill and loving care of Patricia “Trisha” (Crane) Menasco, the quilt tops were transformed into “Special Bear.” Thus, “Special Bear” will always be a loving reminder of Kate Emeline (Harrell) Clark and the precious bonds that create a family that endures for generations.

[AUTHOR’S NOTE: I want to extend my sincere appreciation to two people who graciously provided the information that gave personal glimpses into Kate’s life. My thanks go out to my cousin, Ron Clark, for generously sharing his grandfather’s memoir and other family stories that focused on her married years in Texas. In addition, I am also immensely grateful to my mother, Joan Moreland, who cheerfully indulged me by responding to my request to write about her grandmother Kate. Thank you for the blessing of knowing her better through your eyes.]

6 Replies to “Some Gifts Just Keep on Giving”