Who is Robert Lee Marshall?

Using the small bits of information that my grandmother had shared about her early life (see In Search of My Father’s Father), I began looking for Robert Lee Marshall by searching the Internet. Of course, this was such a common name that the search engines returned thousands of hits. Even when I added other identifying terms into the search box, the results were still too numerous. It didn’t take me long to realize that if I was going to find out anything about him, I was just going to have to take a deep breath and spend the time to systematically delve into the first one hundred or so results. As I began clicking through on the more promising results, the information always described a Robert Lee Marshall but the facts didn’t connect with the man that I was looking for. When I did locate a near “match”, I simply could not be certain that I had found records of my mystery man. He seemed to be as elusive as a ghost.

Treasures in my grandmother’s trunk

Grandmother passed away in 1994 at 92 years of age. Tucked away in her hall closet, she left a trunk filled with photos, letters and various other family records and heirlooms. Since I was her only surviving blood relative, I inherited her estate including the trunk which I then tucked away in the closet under the stairs at our house. Twenty years passed filled with all the things that typically happen in a family. It wasn’t until I retired a couple of years ago that I had the time to go through the contents of grandmother’s trunk in a systematic way in hopes of finding any clues that would help answer questions about Grandmother and Robert Lee Marshall.

It didn’t take long to realize that her trunk was teeming with clues to Robert Lee Marshall and his family. One of the first items I came across was their marriage license (see Image 1). This original document (not a copy) verified that Robert L. Marshall, Jr. had married Lillian Florence Howle on 28 February 1924 in Elk City, OK. 1 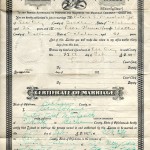 This important document proved that Robert Lee Marshall was real and Grandmother hadn’t made him up. It also confirmed that they had married about a year prior to my father;s birth. Since my dad’s birth was legitimate, that would not have been the reason Grandmother had refused to reveal his father’s name.

I continued to explore the trunk contents and was surprised to find the original papers recording their Divorce Decree 2  (Image 2) dated 30 April 1928. 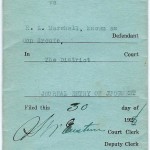 Image 2. Outside cover of the divorce decree

The name of the defendant is “R L Marshall, known as Don Sroufe?”

Holy smoke! Robert Lee Marshall was a fake name! No wonder it was so difficult to locate any record of him. Now I was hooked and I knew I had to find out as much as I could about him to understand why his identity had been such a closely guarded family secret.